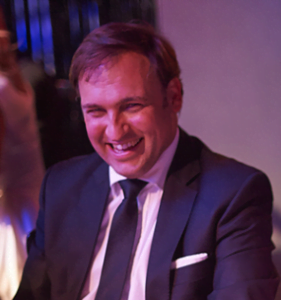 Touring, a company founded almost 125 years ago, has always accompanied Belgians in their travels, whether by bicycle, car or other means. Although it has specialised in providing assistance and insurance both locally and abroad for the past 70 years, Touring is becoming an essential player in mobility in Belgium, focusing mainly on the person and not just his or her vehicle. Touring’s development strategy revolves around a factor that has become a strategic fact of the age we live in: time. So by attending this lunch, you will discover something of the strategy of change that is in the process of being implemented at one of the key players in Mobility in Belgium.

The presentation will be made in French and Dutch.

David Favest, born in 1973 in Uccle, is member of the Executive Committee of Touring, where he holds the position of Director Business to Business. Previously, David has occupied various other senior positions, such as Marketing Director of STIB/MIVB. Before joining Mobility and Public Transportation, Davidheld several local and international executive positions in Marketing and Sales in the automotive industry for a number of OEMs (Chrysler, Daimler, FCA and Kia). David speaks multiple languages fluently, is passionate about networking, mobility and management concepts, and was nominated Marketer of the Year 2017 (Trends-Tendances) and Advertiser of the Year 2018 (MM).

David Favest holds the position of Director Business to Business at Touring. He is in charge of 50% of Touring’s revenue and occupies a key position for tomorrow’s company and for individual Mobility in Belgium. Previously, David held the position of Marketing Director at STIB/MIVB, Brussels’ Public Transport company.  Born in Uccle in December 1973, he graduated in Hautes Etudes Commerciales – specialising in Marketing, in Brussels in June 1995.

On graduating in 1995, David embarked on a long-term traineeship at Xerox, learning sales at the Xerox National Training Center. Soon afterwards, he joined the Automotive Industry as Marketing Analyst, becoming Product and Pricing Manager for DaimlerChrysler BeLux for 5 years. Afterwards, he was appointed as Head of International Training Operations for Chrysler Group International’s Marketing at Chrysler Headquarters (Detroit, MI, USA) during the demanding period of product offensive for Jeep, Chrysler and the Dodge brand outside NAFTA.

Returning to the Benelux market, he was promoted to the position of Head of Marketing Operations BeNeLux for 3 years. After having successfully concluding the local legal company merger between Chrysler Group and Fiat in both Belgium and the Netherlands, a process that took 18 months, David held several board member positions in the Group, finishing in the position of Director of Sales Operations BeLux (B2C-B2B).

Before taking up his new Challenge for Public Transportation, David also managed KIA Motors Sales Operations in Belgium & Luxembourg for 2 years. Having held several global jobs, commuting alternately from offices in Brussels, Detroit and Utrecht. David is married, has one daughter, speaks multiple languages fluently and is passionate about management concepts, digitisation, networking, mobility, endurance car racing, horses, alternative music and the contemporary art painter Edward Hopper. He recently graduated from the IMD Business School of Lausanne, Switzerland and was elected Marketer of the Year 2017, a coveted award from the Belgian Association of Marketing and the business magazine, Trends-Tendances. In early 2018, David won the Advertiser of The Year award from Media Marketing.  David was also a member (co-chairman) of UITP’s Marketing Commission and an authoritative UITP Lecturer.